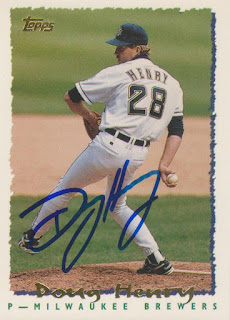 I am pretty sure that this is the last card of Doug Henry as a Brewer that I will ever post on here. While it seems like I have posted about ten of them already, this is only the fourth one. But, I did post cards of him as an Astro and Met. I still have three more cards to post of him, but two of them are newer minor league cards that may never see the light of day on this blog at the rate I am going.

This card was signed by Doug last season in St. Louis when the Royals, whom Doug was the bullpen coach for, made their annual cross state trek to play the hated Cardinals. I got to the ballpark nice and early to try to 'graph the Royals during BP. But, right after the gates opened, the Royals wrapped up BP and left the field. Brandon Moss was the only player that I saw sign and he just signed a few and not for me.

So, I did what I always do when it is a bad day of 'graphing- I went looking for Doug Henry.

Sadly, Doug is no longer the bullpen coach for the Royals. He has been replaced by Vance Wilson and I do not have any cards of Vance that aren't signed already.

I never noticed this until just now, but this set is kind of hard to judge how well the cards are centered.
at 12:38 PM