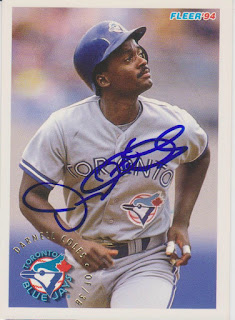 Here is the third and final card that Darnell Coles signed for my oldest boy at Spring Training last year. Darnell is the batting coach for the Brewers and he signed at Goodyear Ballpark at a game against the Reds. We saw the Brewers twice last spring and I tasked my son with 'graphing them for me. He didn't do great, but I have definitely had far worse days than he had.

We are going to see the Brewers play again this spring. Only this time, I will be 'graphing the club. Darnell is not a high priority this year, but I have pulled a Pirates card of him if he happens to sign. He already signed a Tiger and Mariner card for me. I will only need a Reds card signed by him if I get the Pirates one done.

Darnell played for the Blue Jays for two seasons. Over that time, he hit .234 with 8 home runs and 41 RBI. Despite playing for the World Champion Blue Jays in 1993, Darnell was not on any of their playoff rosters.
at 6:41 PM