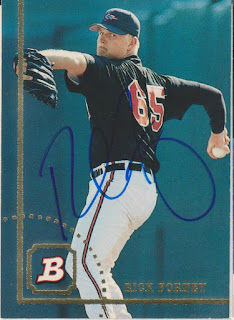 Here is a card that I got signed at a Wichita Wingnuts game in 2015. Rick is the manager of the Winnipeg Goldeyes and I was able to get him to sign this lone card prior to the game.

Rick never reached the Major Leagues, but he did pitch in the Baltimore organization for six seasons. Over that time, he amassed a 47-32 record and a 3.54 ERA. He reached as high as AAA, getting three starts with the Rochester Red Wings in 1995. He was released after that season and spent five more seasons pitching in independent leagues, with a brief stop in the Southern League with the Braves affiliate.

Rick has been the manager of the Goldeyes since the 2005 season. Under his helm, the team has made the playoffs nine times and have won three championships, including back-to-back wins the last two seasons. His clubs have had a losing record only twice since he took over.

I barely have any 1994 Bowman in my collection, so I had to venture over to COMC to pick this one up.