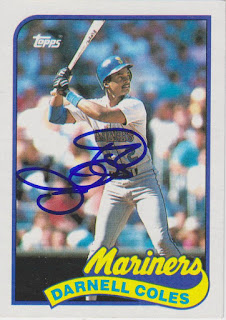 This is the second of three Darnell Coles cards I got signed at Spring Training and it is the last of the '89 Topps cards that I have to show. We would be heading into the '90s with the next post, but a new card company hit the market in 1989 and I have two cards from that set to show before advancing to the next decade.

This card is one of the fourteen cards my oldest boy got signed for me this past spring. At all the games we went to, the Brewers were the visiting team. So, I tasked my kid with 'graphing them for me and I would pay him a buck a signature. Darnell was the Brewers batting coach and he signed three for us before a game against the Reds at Goodyear Ballpark. I posted the first card three months ago and it can be seen here.

When this card came out, Darnell was on his second stint with the Mariners. He made his debut with them in 1983 and played in 102 games with them over three seasons. He was then dealt to the Tigers and then the Pirates before landing back in Seattle prior to the 1988 trade deadline.

Darnell was as hot as could be after his return to the M's. He got into 55 games over the final two months of the season and hit .292 with 10 home runs and 34 RBIs. Unfortunately, that hot finish would not sustain itself through the following season. In 1989, Darnell played in 146 games and hit .252 with 10 dingers and 59 RBI. It was the last season that he would play more than 100 games. He would be traded back to the Tigers during the 1990 season.
at 10:15 AM