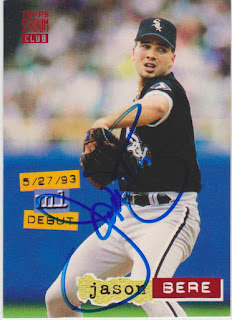 Here is the second card that Jason Bere signed for me at a Royals game in 2016. Jason was the Indians bullpen coach at the time and he signed for me from the visiting team's bullpen.

Jason pitched with the White Sox for the first five and a half seasons of his career. Over that time, he was 39-32 with a 5.21 ERA. His career got off to a great start with Chicago. In his rookie season, Jason went 12-5 with a 3.47 ERA. He followed that season up with a 12-2 mark and a 3.81 ERA the next year and earned himself his lone All Star Game invite. But, the wheels fell off the next season and Jason went 8-15 with a 7.19 ERA. He started having arm problems after that and would make only eleven appearances over the next two seasons. He was back for the 1998 season and had a 3-7 record and a 6.45 ERA when the Sox released him mid-season.

Jason got to pitch in the All Star game that he made in 1994 and it did not go too well for him. Jason got the nod in the tenth inning of a 7-7 game. He gave up a lead-off single to Tony Gwynn (who started the game) and followed that up with a double to Moises Alou that scored Gwynn. Game over.
at 10:51 PM