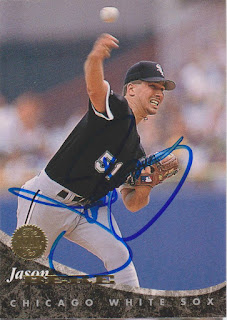 Here is the first of three cards that I got signed by Jason Bere at a Royals game in 2016. Jason was the Indians bullpen coach at the time and he was the lone signer for me on a warm July afternoon.

Even though Jason pitched in the Majors for eleven seasons with five different clubs, I could only find White Sox cards of him to get signed. Plus, all three cards were from 1994 sets. So, there will be a nice little dose of Jason on here over the next four posts.

After three seasons as the Tribe's bullpen coach, Jason has moved on to other things this year. What those other things are, I do not know. But, I do know that the new bullpen coach in Cleveland is Scott Atchison. It looks like Scott only has two cards and I do not have either one.