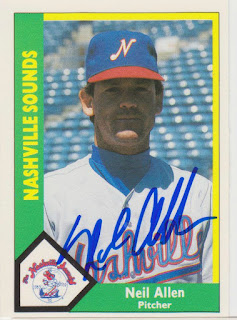 Here is the third and final card that Neil Allen signed for me in Kansas City this past season. Neil was the pitching coach for the Twins and he signed for me after stepping off the team bus outside of The K. You can see the first card I posted of him here and the second one here.

Even though the Twins captured the second Wild Card spot after finishing the year 85-77, Neil was let go by the club after the season was finished. He was replaced by Garvin Alston. That means that I will not be getting Neil to sign his '81 Donurss card next year when the Twins come to town. That is, if I actually had that card ('81D want list posted underneath blog header, hint, hint).

By the time this card came out, Neil's Major League career was over. He appeared in just three games with the Indians in 1989 and was 0-1 with an ERA of 15.00. With Nashville in 1990, he pitched in twelve games before calling it a career.