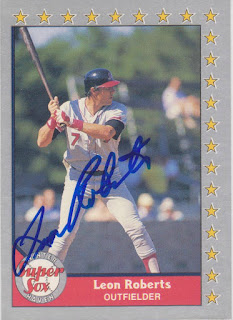 This is the third card of Leon that I have posted on here. The first one was a TTM success from 2012. You can see that card here. The second one was his '85 Topps card that my best friend, Dustin, got signed for me while we were at a Sacremento River Cats game in 2015. That card can be seen here. This card was also signed by Leon that day.

Even though Leon played in the Majors for eleven seasons, I have very few cards of him. In fact, all four cards I own are now signed. Leon coached in the Royals system last year, and when I went to Surprise for Spring Training, I had nothing of Leon to get signed. That is too bad because he has some really good-looking cards from the '70s. It is just that I didn't start collecting cards until Leon's playing career came to a close. That is why half of the cards I have of him are from after he retired.

I have four signed cards of Super Sox from this set. All four of them feature less than spectacular action shots. The three batter shots look identical to this, with the one pitcher shot looking a little better. Every other team has nothing but posed shots, with the exception of the Tropics, which has a mixture. Again, I am only going off of the cards that I have signed, so it is a small sample size. But, it seems strange that all of the shots in the set are posed except the Super Sox and a few random others (Willie Aikens being one of those).
at 3:06 PM