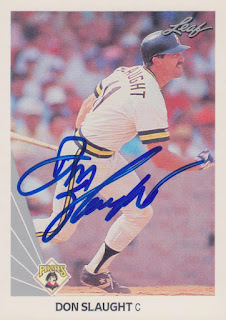 Here is a card that I won in a Twitter contest a couple of years ago. This card, and a couple of others, were being given away by Autograph Rob and I was fortunate enough to win. I believe this is the only contest Rob ever held and his Twitter account has been dormant for the last eight months. To date, this is the only thing I have ever won on Twitter.

With the Milt Thompson 1990 Leaf and this one, I now have four whole cards signed from this set. Dan left a comment on the Thompson card and he hit it on the head- these cards were expensive in 1990. Because of that, I do not have a ton of cards from this set. Back then, I could buy one pack each of Topps, Donruss, Fleer, and Score, or I could buy one pack of Leaf. When I was eleven years old and on a budget, that was an easy decision to make.

I always thought it was odd that they just called this set Leaf. For all of the '80s, Leaf was to Donruss what O-Pee-Chee was to Topps. They were just a Canadian clone. You would have thought Leaf would have came up with a better name, something flashy that justified the price increase.

Don played in the Majors for sixteen seasons with the Royals, Rangers, Yankees, Pirates, Angels, White Sox, and Padres. Over that time, he was a .283 hitter with 77 home runs and 476 RBI. His best season was with the Pirates in 1993. That year, he hit .300 with career highs of 10 home runs and 55 RBI.