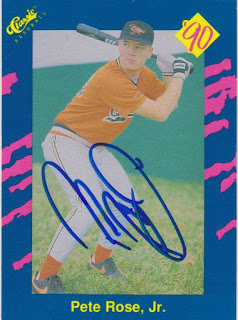 Over the past two seasons, Pete Rose, Jr. has been the manager of the Wichita Wingnuts. Over those two seasons, his clubs won their division and advanced to the league championship, losing both times. The Wingnuts were 122-77 under Pete and they decided to not renew his contract for next season. That kind of seems like a Yankees, or Nationals, or Red Sox type of thing to do.

In the few Wingnut games I attended over the last two years, I only got Pete to sign for me once. That was at the first game I attended last year. I had one card of him in my collection and I bought this one and one other and he happily signed all three for me.

It is always an exciting time when the 'Nuts are in a managerial search. The next one will be the fourth one in eleven seasons. As an autograph collector, I always hope for someone with Major League experience that has plenty of cards out there. The last two managers had Major League experience, but only 25 games between the two of them.

This is an interesting card of Pete, Jr. He was drafted in 1988 and played his first pro season in '89. At two different stops that season, he hit .254 with 2 home runs and 33 RBI. I guess that Classic wanted him in the set just for the name, and quite possibly the batting stance. Another interesting thing about this card is that there is not a position listed for Pete. It looks like all the cards from the set might have been like that.

I am surprised that Pete Jr signed for you. During the one season he spent with the Reading Phillies (AA) during his long , meandering minor league career, he was known to be the toughest autograph on the team. H e usually walked onto the field with a coffee cup and wouldnt even acknowledge nearby fans.

He was the complete opposite with the Wingnuts. He must have grown out of the too good phase.