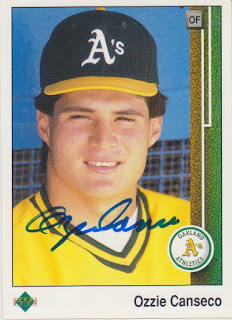 It has been a month since I have posted a card on here of a player for the first time. A month ago, it was Don Mattingly. Here is Ozzie Canseco, the lesser of the Canseco brothers. The difference between Mattingly and Ozzie is that I only have one card signed by Donnie Baseball. Ozzie signed five cards for me over the two encounters I had with him.

This one was signed the first time I met him. It was at a Wingnuts game two years ago. The Nuts were hosting the Sioux Falls Canaries. When the season started, Roosevelt Brown was the Canaries hitting coach. I knew I was going to see them play, so I picked up a card of Roosevelt from COMC. When game time came around and I started rounding up cards for the game, I was pleasantly surprised to see that Roosevelt had been fired and Ozzie took his place. Even though Roosevelt had significantly more playing time in the Majors than Ozzie did, I actually had cards of Ozzie. Plus, he is a Canseco. And he was super nice, too.

I never got Ozzie, but I did unexpectedly see him shopping at a local mall several years ago. He looked like Jose but didn't have a birthmark on his hand, so by process of elimination, I concluded that it was Ozzie. I did say hi to him but didn't have a card to get signed.