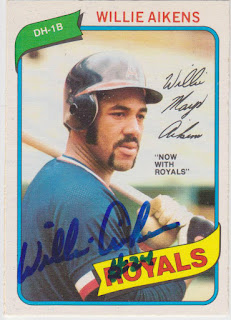 To date, I have posted three cards of Willie Aikens on here. I thought it was much more than that. But, as it turns out, I have got a small handful of cards from the last two Royals Fanfest that I have yet to post. So, here is the first of those. This one was obtained at the 2014 Fanfest.

The first three cards I posted showed him with three different teams. There was one of him as a Royal, a Blue Jay, and an Explorer from the senior league. Since I had a card signed by him from the Royals and Jays, naturally I needed a card of him with the Angels signed. This O-Pee-Chee card was the best I could do on short notice in 2014. So even though it clearly says Royals on the card, Willie is still in an Angels uniform and that counts for something.

Willie's tenure with the Angels lasted just parts of two seasons. After being drafted by the Halos in the first round in 1975, he made his debut with them in '77. He got into just 42 games and hit .198. He spent the next season in the minors, but returned to the Angels in '79 and did real well. That year, he hit .280 and clubbed 21 homers while driving in 81 runs.

After that season, the Angels traded him and Rance Mulliniks to the Royals for Al Cowens and Todd Cruz.

The Blue Jays card I linked to above was signed by Willie at Fanfest in 2013. That card was signed Willie Mays Aikens. Willie apparently dropped the Mays out of his signature shortly after that.
at 11:03 PM