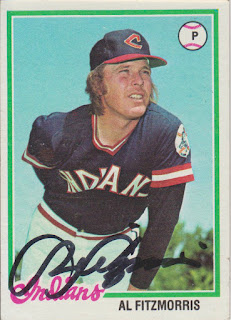 Here is the second card of Al Fitzmorris that I have posted on here. The first card was posted back in 2013 after a chance run-in with Al at a Royals game where I had to buy the card from a fellow collector. This card, too, was also signed at a Royals game. This time, it was at the Royals Sunday alumni signings that they host in their Hall of Fame at every Sunday home game. Since I know that someone is going to be signing there every Sunday, and the Royals do not release who it is going to be, I always have a fat stack of Royals alumni cards with me. After getting this card and one other signed by Al in 2015, I think I need to buy a couple more cards of him for the next time I run into him there.

Al pitched for the Royals for eight seasons before being picked by the Blue Jays in the expansion draft. He never pitched for the Jays, though, as they traded him to the Indians right after picking him. He was coming off of three consecutive double digit win seasons with the Royals, but he could not continue that in Cleveland. In fact, he really struggled there going 6-11 with a 5.60 ERA through a season and a half.

I love where Al signed this card. As you can see by the Jim Kern card I last posted, cards with those dark Indians jerseys could be a pain to get signed. But Al picked the best possible spot on the card to apply his signature. Not everybody does that, but it sure is appreciated when they do.
at 10:15 PM