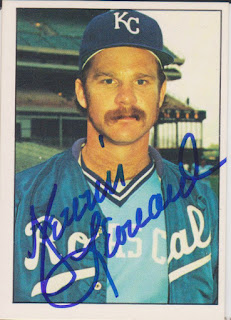 Here is the sixth card of Dennis Leonard that I have posted on here, but just the second SSPC card. Dennis is such a regular at Royals events that it feels like I should have a dozen cards signed by him. I only have eight, but I have a couple of unique odd balls signed by him. I am really looking forward to showing the next one and that is not something I usually say about the seventh card I have posted of a player.

As for SSPC, I went in to detail about the set when I posted the first card of Cookie Rojas in early 2103. Check out that post if you would like to know more about the set. Or, head over to Night Owl Cards and look for some posts he did on the set. There have been some good ones over there.

I got this card signed at a Royals game in 2015. Dennis was in the Royals Hall of Fame for the Sunday alumni autograph signing. This is one of the rare times that I wish the card was signed in black and not blue. But, for a blue on blue signature, it still stands out fairly well.
at 11:06 AM