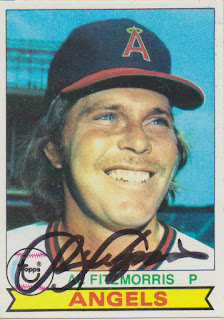 Here is the second card of Al Fitzmorris that I have posted this week. The first one showed him as an Indian and this one has him with the Angels. Add in the Royals card I posted three years ago and we have the three teams that Al played for.

For me, three is the magic number. Whenever I go 'graphing, I almost always take three cards of a player because my book holds three cards per page. Ideally, if that player has played for more than one team, I make sure I get a card of each team. If they played for more than three, I narrow it down by which cards are going to look the best signed. For whatever reason, I just like to mix it up a bit when I get more than one card signed by a player. And, I have effectively done that with Al Fitzmorris with this card. Now I can concentrate on getting a few more Royals cards signed by him in the future.

It is kind of surprising that Al got this card of him as an Angel. His tenure there only lasted nine appearances. Despite the limited work, Al did alright by posting a 6-1 record with a 1.71 ERA.

Al finished his career with a 77-59 record with 7 saves and 3.65 ERA. He still lives in the Kansas City area, so I sure that there will be more cards of him here in the future.

This is final card from the seventies. I am pretty excited to be hitting the '80s with my next post. Expect to be seeing plenty of '81 Donruss coming up.
at 10:36 PM

Thought you might. It had a little bit of everything this go around.