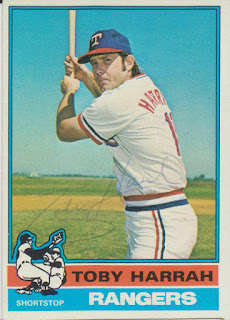 Here is a card that was given to me a few years back by Ryan, from The Great Orioles Autograph Project. Most of the autographs Ryan has sent me over the years fit one of two categories. They are either extra Oriole autographs that he has or are extra cards that he got signed at Harrisburg Senators games when he was younger. I know Toby never played for the O's and I cannot find a connection with him to Harrisburg. So, the best I can come up with is that Ryan sent me this card just to rid himself of a fading ballpoint signature from a guy that never played for Baltimore. And I am completely fine with that.

When I think of Toby Harrah, I think back to the first set I ever collected, 1985 Topps. I was fascinated with Toby's stats on his card because the Senators were listed on the back. The only thing I knew about the Senators was that they were not around any more and I thought it was cool that I had a card of guy that once played for a team that no longer existed. Being six years old, I had know idea that they packed up and moved to Texas.

Toby had a seventeen year career an played with the Senators/Rangers, Indians, and Yankees. He was a .264 hitter with 195 home runs and 918 RBI. He had five 20+ home run seasons and made four All Star teams.

The signature on the card looks slightly better in person.
at 9:54 PM