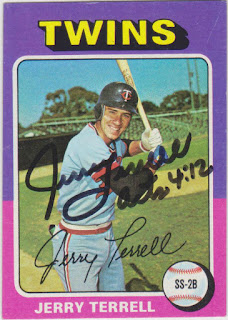 Here is another '75 Topps Mini that I was able to get signed this year. Actually, my dad got this one signed for me at Royals Fanfest. I was in line with my boy and his friend to get pictures with the championship trophy and my dad was just wandering around. He came back because he saw Jerry and Les Norman by the wiffleball field. So I gave him a couple of cards and he got one signed by each player.

Unfortunately, that was how the 'graphing was going at Fanfest following the World Series victory. The only current player I got that day was back-up catcher Drew Butera and I got that one by the whiffleball field, too. All of the autograph lines filled up super-quick and I did not want to stand in a line for three hours not knowing who was going to be signing there after the long wait. So I just grabbed who I could when I could. Besides Butera, it was all alumni. But, this was the first time that I had got Jerry and, since it was on a '75 mini, I was pretty happy about it.

I could not have done it without my dad, so props to him for helping me out.

After that experience with Fanfest, I am still undecided about heading back up there this year. Deep down I want to go as it might be the last time I see Eric Hosmer and I still do not have a card signed by Salvador Perez. But at the same time, I usually get really annoyed at the event because the Royals do not run the autograph lines as well as they should and I miss out on some people I should have been able to get. I still have time to decide, though.
at 1:23 PM