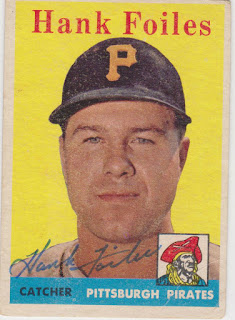 Next up is this '58 Topps Hank Foiles card that I got signed in 2013. I sent this card to Hank in April and I had it back about three weeks later. If I remember right, he also sent me card about his book. I cannot find that card, but he wrote a note on the back of the letter I sent him that briefly tells me about his book, "A Pirate's Journey", that can be purchased from his website.

That seems like a fitting name for his book considering that he played for eight Major League teams during his eleven year career. He made his debut with the Reds before being dealt to the Indians after five games. He played with them for parts of three seasons before moving on to Pittsburgh. He had his longest tenure with any one team with them as he was a Pirate for three and a half seasons. Then he had a whirlwind 1960 season where he played for the A's, Indians, and Tigers before settling down with the Orioles in '61. He was back in Cincinnati in 1962 and for one game in '63 before getting released and ending up an Angel through the '64 season. That was quite a journey.

Through all of that, Hank was a .243 hitter with 46 home runs and 166 RBI. His best season came with the Bucs in 1957. That season, he hit .270 and had career-highs in homers (9) and RBI (36). He was rewarded for that fine season by being selected to the National League All Star team. He represented his team well in the Mid-Summer Classic by getting a single in his lone at-bat. He came around to score, as well.
at 9:27 PM