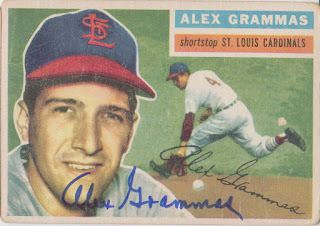 At the end of 2012, I started attending the bi-monthly card show held by Rock's Dugout in Wichita. There was one dealer there that always had a nice assortment of singles from the mid '50s through the early '70s. Back then, I would spend 95% of my time at the show looking through his stuff in search of cards of guys that signed through the mail. The guy would always cut me a good deal which brought me back every time. Because of him, I have this nice assortment of random TTMs that I am posting now.

This one features the former Cardinal, Red, and Cub, Alex Grammas. Alex was the prototypical slick-fielding/light-hitting shortstop that was the norm back in the day. He was a .247 career hitter with just 12 home runs and 163 RBI over his ten year career. His best season was probably with the Cardinals in 1959. That year, he had a career-high 368 at-bats and responded with a .269 average with 3 dingers and a career-high 30 RBI.

I sent this card to Alex in February of 2013 and I had it back one week later.