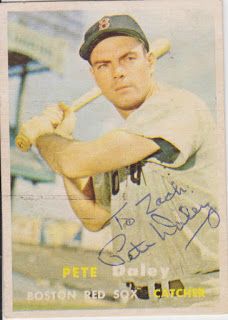 Here is the last 1957 Topps card that I got signed through the mail in 2013. I sent this card to Pete in February of that year and had it back just over a month later.

Pete played in the big leagues for just seven seasons, seeing time with the Red Sox, A's, and Senators. He spent five of those seven seasons in Boston and was mainly their back-up catcher behind Sammy White. Pete was a .239 career hitter who finished with 18 home runs and 120 RBI.

I have never asked for an in-person autograph to be done in ballpoint pen. I always want it done with a Sharpie. But seeing a signature like this makes me consider rethinking my practice when it comes to older cards. I love the way the pen came out on this card. The look fits the time period better than any Sharpie would.
at 11:30 PM