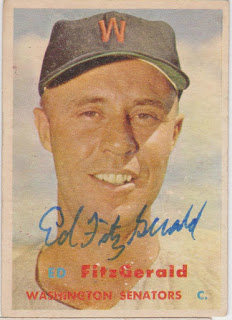 Next up is the card that Ed Fitz Gerald signed for me through the mail in 2013. I sent this card to him in February and I had it back five days later. It was quite the turnaround. This one and the previous card both arrived in my mailbox on the same day, which happened to be the day before my birthday. So, they were like early birthday presents to myself. But then again, anytime you get a TTM in the mail is like an early birthday present to yourself.

Ed spent a dozen years in the Majors with the Pirates, Senators, and Indians. He was mainly a backup catcher his entire career as he only started a majority of his team's games once. That was with the Sens in 1954. That was his first full season in Washington and he responded with a .289 average, 5 triples, 4 homers, and 40 RBI. That was pretty good for a .260 career hitter.

Ed's career started in the late '40s and he has some good looking early cards that would be cool to get signed. His '49 Bowman stands out as does his fantastic looking '52 Bowman. However, since I got this card signed three years ago, I have no idea if Ed is still signing through the mail. He is 92 years old.
at 11:20 PM