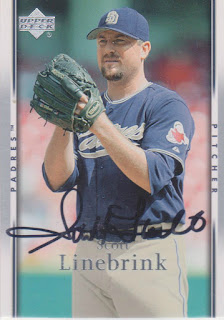 This is a card that I got signed by Scott Linebrink at a Royals game in 2009 while Scott was playing for the White Sox. Like most Royals games I am able to attend, it was a Sunday day game and there was no batting practice. So, I was relegated to trying to get pitchers. Scott was the lone player to sign for me that day and he only signed one of the three cards I had on hand. But, I did not come home empty handed.

Scott pitched in the big leagues for parts of twelve seasons with the Giants, Astros, Padres, Brewers, White Sox, and Braves. His best years were with the Padres from 2003-2007. He made over half of his appearances with them over that time and was 27-12 with 4 saves and a 2.73 ERA. That is pretty good considering that he was 42-31 with a 3.51 ERA for his career. If it was not for a man named Trevor, I am sure that he would have racked up more saves in San Diego.