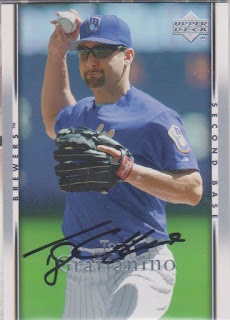 Here is the third and final card that Tony Graffanino signed for me before a Royals game in 2009. Tony was with the Indians at the time and he was nice enough to sign the cards during batting practice.

Speaking of batting practice at Kauffman Stadium, I do not think that fans will be able to get 'graphs there from here on out in the good spots. By good spots, I mean the home plate side of the dugout. I have not been to a game at The K yet this season, but I know that the Royals said they were going to put extra netting up that spanned from dugout to dugout. It is just another example of how it continues to get harder to 'graph that ballpark. The glory years of me 'graphing the parking lot in 2008 and '09 are long gone.

The previous two cards of Graffanino showed him with the Braves and Red Sox. Despite playing for them, the Brewers, Indians, Devil Rays, and White Sox, I mostly remember Tony from his time with the Royals. Despite that fact, I was unable to find a card of him as a Royal before heading to that game.