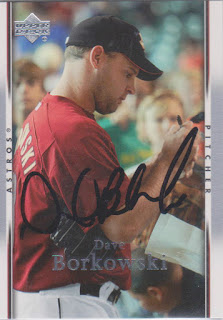 You cannot beat a signed card of a guy signing autographs!

Here is a card of Dave Borkowski that I got signed at a Round Rock Express game in 2008. Dave was playing for the Express at the time and he signed this lone card for me before the start of the game.