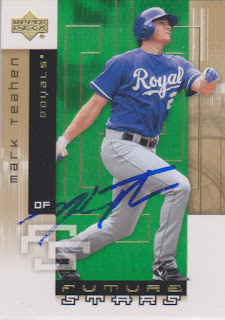 I got this card signed at a Twins game in 2009. The Royals were in town for the last regular season games at the Metrodome, so I decided to make the trip for the occasion. If the Royals would have done better in the series, it could have been the final games there. But, the Twins slipped into the postseason after game 163 against the Tigers.

Mark signed this card for me just before first pitch.

If you never opened any 2007 Upper Deck Future Stars, you did well. The name of the set is a bit misleading as it is a full set of stars at the time, not future stars. For some reason, I think I bought two discounted blasters of this product and I was highly disappointed. The only "future stars" cards were inserts and they were a little hard to come by. I think I pulled one out of each blaster and they were nothing special. Just stay tuned for the next post and you will see what I am talking about.

This set is pretty glossy and, though I did prep this card with baby powder, it still managed to bubble up a bit on me.
at 8:40 PM