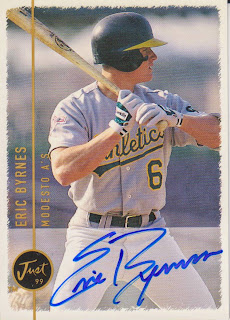 Here is a card that I picked up of Eric Byrnes for cheap from COMC. This one set me back a whopping sixty-nine cents. You cannot beat that.

Eric played in the Majors for parts of eleven seasons with the A's, Orioles, Rockies, Diamondbacks, and Mariners. He hit .258 for his career with 109 home runs and 396 RBI. He was only an everyday player for four seasons, two with Oakland and two with Phoenix, and he put up some good numbers during three of those seasons (20+ home runs, 70+ RBI). He even started to steal some bases when he got out of Oakland and topped out with 50 with the D-Backs in 2007.

That was probably his best season. Besides the career highs in stolen bases, he also had highs in average (.286) and RBI (83). Things took a turn for the worse the following season, though, when Eric was limited to just 52 games. He landed on the disabled list that season for the first time in his career and ended up hitting just .209 for the season. He rebounded to the tune of .226 the next season, but was limited to 84 games. He was released by the D-Backs after the season and hooked on with the Mariners the following year. His tenure lasted 15 games before getting released and he called it a career.

Since retiring, Eric has had various broadcasting duties with multiple networks. I believe he currently works for the MLB Network.

I really like the signature on this card. It looks much better than the one on the 2005 card on his Baseball Almanac page.
at 10:47 PM