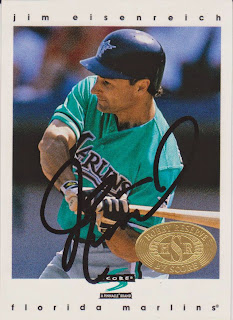 Here is one of my latest Jim Eisenreich signatures. And by latest, I mean that I picked it up at Fanfest about ten months ago. Jim is a regular at Fanfest and I have a few cards signed by him, mostly Royals. At this last Fanfest, my goal was to get some non-Royal cards signed. All that I had prior to that was a Phillies card signed. Jim also played for the Twins, Marlins, and Dodgers and, thanks to COMC, I was able to find a card of him with each team and get it signed. Here is the Marlins card I got.

Jim played for the Marlins for about a season and a half. He spent time in the outfield and at first for them, as well as pinch hitting. He hit .275 as a Marlin with 3 home runs and 41 RBI. He was on their championship team in 1997 and was 4-8 in the World Series with a home run and three RBI.

That was Jim's second and final trip to the fall classic, with his first being with the Phils in 1993. Over the two series, he hit .294 with two home runs and 10 RBI.

This card has a Hobby Reserve stamp on it. I have no idea what that means. I am not sure if these things were randomly inserted into hobby packs or if there were entire packs devoted to this product.
at 9:34 PM