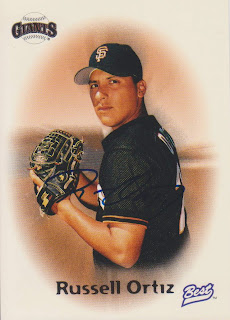 Check out this early Russ Ortiz signature card. It is so early in his career, in fact, that he was still going by his given name of Russell. That may be why I was able buy this card for a mere seventy-five cents. At least that is what I thought until I got it and noticed it had a small wrinkle in it. But, for the price, I don't really care.

Russ pitched in the Majors for parts of twelve seasons with the Giants, Braves, Diamondbacks, Orioles, Astros, and Dodgers. He was mostly a starter and spent half of his big league seasons with the Giants. He was a 20 game winner once and made his lone All Star team that season. For his career, Russ was 113-89 with a 4.51 ERA and 1,192 strikeouts.

His poor postseason performance might have been the main reason why the Giants shipped him off to Atlanta during the off-season for Damian Moss and Merkin Valdez. The Braves got the better end of that deal as Russ had his All Star season in Atlanta in 2003. His postseason struggles continued, though, as he was 1-1 with a 7.24 ERA in three starts over two Division Series.

The Braves let him walk after the 2004 season and Russ's career as a journeyman began.
at 7:45 PM