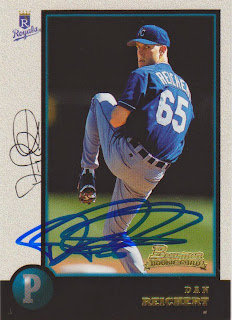 Here is the first of three cards that Dan Reichert signed for me before a Wichita Wingnuts game in 2013. Dan is the pitching coach for the Lincoln Saltdogs and he was nice enough to sign the three cards and an 8x10 before the start of the game.

Dan was drafted by the Royals in the first round of the 1997 draft after a standout career at Pacific University. He finished his junior season as the Big West Pitcher of the Year and All-American after going 13-4 with a 2.30 ERA with 169 strikeouts in 133.1 innings. After being taken seventh overall, Dan was assigned to Low-A Spokane. He finished up his season there 3-4 in nine starts with a 2.84 ERA.

Dan racked up some travel miles in '98 as he had stops in the Midwest League, Carolina League, Texas League, and Pacific Coast League. He got the most work in at the AA level and finished up the season 5-6 with a 5.77 ERA.

He spent most of the next season in AAA and was 9-2 with a 3.71 ERA and more than a strikeout an inning. In the middle of that solid season, he got called up to Kansas City for a handful of starts. He made his Major League debut in Milwaukee in July. He got the start in the second game of a doubleheader and did not do so well. He lasted just 1.2 innings while giving up 7 earned runs on 5 hits, 4 walks, and a hit batter. All seven runs scored in the second inning. Somehow, the Royals ended up coming back and winning that one.