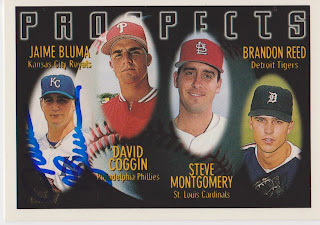 Here is the first of three Jamie Bluma cards that were signed for me at Royals Fanfest earlier this year. These three are going to be coming nearly back-to-back-to-back, so it is going to ba a lot of Jamie Bluma over the next week. If it wasn't for another card breaking up the Bluma's, I would probably have a Jamie Bluma day like I did with Bob Apodaca a few years back.

Whenever I have a card signed, and it has other players on it, I always like to try to get the other players to sign it to complete the card. But, the more guys on the card, the harder it is. I'm have a handful of cards signed by two players and one card each signed by three and four. I would think that this card would be a difficult card to complete. That is based on the fact that it still needs three more signatures and that I have never heard of the two players on the right.

It turns out that, out of the four pitchers on the card, only Brandon Reed never made it to the majors. The other three were in the big league for a combined 149 appearances with Steve Montgomery leading the way with 72.

Nonetheless, it is difficult to get a card signed by four guys. In order to complete this card, I would have to find the addresses for the three other guys and then mail this card out three times and hope it comes back each time. That is a lot to ask for. The one card I have that has four signatures on it I was lucky to get. I sent it to one of the guys and he had the other three sign it, too. It was pretty cool and very lucky.
at 5:57 PM