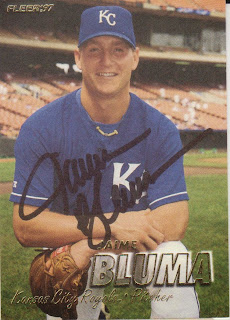 This is the third and final Jaime Bluma card that I got signed at Fanfest earlier this year.

In my last Bluma post, I talked about his successful debut with the Royals in 1996 (5 saves, 3.60 ERA). Unfortunately, that was the end to Jaime's Major League career. He ended up missing all of the 1997 season to an arm injury and he was never able to come back from it. He continued to pitch in the Royals system through 2000, but he never had the velocity or command that he had before the injury.

I was graduating high school in 1997 and baseball cards were the last thing on my mind. Because of that, I never saw these cards until I started blogging. That is too bad as I love this set. This is the perfect card for autographs. While there is a bit of gold foil on the card, there is no gloss whatsoever. In fact, these cards are the exact opposite of glossy. They have such a matte finish that they kind of feel a little fuzzy. That fuzzy matte finish even absorbs the signature a bit so that the sig looks matte, too.

They are absolutely perfect and I wish I had more of them. It is too bad this is the only one that I have signed.
at 9:37 PM