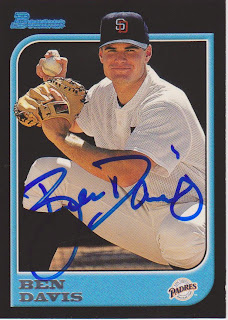 A few years back, Rod, from Padrographs, sent me a package of Royals and autos. This was one of the cards that he sent, but it somehow got skipped over the last time I did a recap. So, three years later, here it is.

A few years before that, in the early days of this blog, Rod sent me a package of over one hundred Padrographs. In that package was a Ben Davis card and that post can be seen here.

I posted that card in early 2010 while Ben was trying to re-invent himself as a pitcher. He had pitched in the Atlantic League in 2008 and in the Florida State League in 2009 with the Reds. He only appeared in 9 games that season, but he did well- 0-1 with 4 saves and a 3.09 ERA. I wondered then if his career was through or if he was still trying to make it as a pitcher. It turns out he gave it one more go.

Zach, will you email me your address. I have some stuff for you.