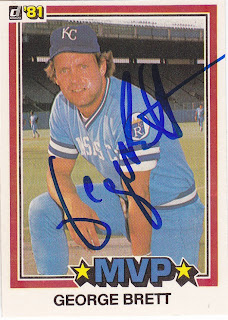 Trust me, this is a different card than the last George Brett I posted on here. It uses the same picture, but this one commemorates George's 1980 American League MVP award.

I got this card signed at a Kansas State basketball game. The Royals Caravan rolled through there a few weeks ago, so I bought myself a $25 ticket and went to the game. Unfortunately, the Caravan crew (Brett, Jamie Quirk, and Joe Randa) were only attending a booster party and then watching the first half of the game. There was no autograph session.

Feeling down, but not out, I camped out by the room where the "party" was. There was two doors to the room, so I stayed at the midway point between the two while mainly watching the back door. About ten minutes before tip-off, I saw George coming out the back door and heading for the seating bowl. I intercepted him on the concourse and asked him for an autograph. He grabbed my book and signed one card while walking. He didn't say anything to me or even look at me, but I got my card signed. So, I was happy that the trip wasn't a complete waste.

I'm not sure where this picture is taken, but I know that it is not Comiskey Park. My guess is Exhibition Stadium in Toronto.

This is the last '81 Donruss for now. I'll have another card up later tonight.

Wow, from your comments, it seems Brett is so bitter about autographs. Disappointing. But if I were in his shoes, perhaps understandable. Not sure though.

I know what you mean. I didn't have much of a problem with it at the basketball game. But, Fanfest is another story.