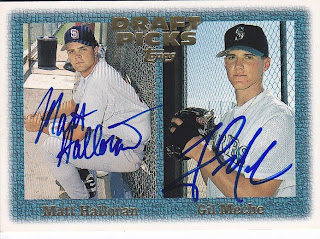 I posted this card back in December without Gil's signature on it. Luckily at Fanfest, I was able to get him to complete this card. I had thought about leaving Fanfest early, but when I heard that Gil was signing in one of the final sessions, I hung around a little later. When Gil saw the card, he said "wow, you've been holding on to that one for awhile". When I told him that I was given the card just a couple of years ago, he seemed unimpressed.

This is the first card I have posted on here of a current Royals player. I worked too long today to want to write up a new post, so I just added this stuff to the original.

This is the last card for 1997 and it is one that I am kind of ashamed of. This is a cool Padrograph that Rod sent me. When I got it, I was pretty excited. I wasn't excited about the Matt Halloran autograph since I had never heard of the guy. I was excited because a current Royal, Gil Meche, was also on the card and I thought that this was going to be my first card signed by two players. I have had this card for over a year now and still no Meche autograph. Fanfest is right around the corner and hopefully I will get this card completed then. Then again, I said that last year, too.

Matt Halloran was a first round draft pick by the Padres in the 1996 draft. Unfortunately, professional baseball never panned out for Matt and he never reached the Major Leagues. In six seasons in the minors, Matt only played in 396 games. I'm guessing that he was hurt most of the time. If not, the Padres must have gave up on him early to use him so sparingly. After his first year of Rookie ball, he spent the majority of his career in A ball. In his final season, he played in 27 games in AA. For his career, Matt only hit .219 with 4 home runs.

As soon as I get the other half of this card signed, I will repost it.

Tomorrow, I will continue on to the 1998 cards. This is a weird year for me since out of the fifteen cards I will be posting, eleven of them were given to me. So, there won't be too many cool stories about how the autograph was obtained. But, there are some cool cards to show and it will still be fun.
at 9:30 PM

Good luck getting that one finished. I don't think I have very many completed multi-signature cards in my collection at all.

I don't have many either. I think I have three. Counting this one, I think that I am working on three others.

I hope you get it finished!