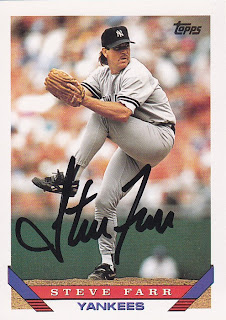 Here is the fourth and final Steve Farr card from Fanfest. This one, like the last one, features Steve as a Yankee. Steve's best season came while he was in pinstripes in 1992. That season, he had a career best ERA of 1.56 in 50 appearances with them while notching 30 saves, also a career best.

However, the next season didn't go nearly as good for him. That season, his ERA ballooned to 4.21, the highest he had had since his rookie season. He still managed 25 saves for an improving Yankees team, but the Yankees decided not to re-sign him after the season. He pitched one more season before calling it quits.

Steve has a nice and easy signature.
at 8:00 PM

I completely forgot that Steve Farr played for the Yankees... then again, the early 1990s were not an especially good time for New York-area baseball.