This past weekend, I got a nice little package in the mail from Wicked Ortega of My Past Time...I Love It fame. In it was a healthy stack of Royals. Here are the highlights. 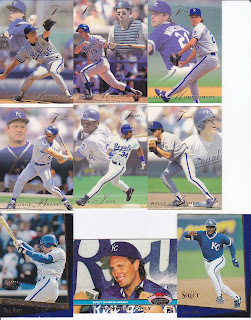 He sent me almost a packs-worth of '93 Flair Royals. I wish I would have had a couple of them when I went to Fanfest. Those cards would look great signed. There were also four cards from the Score Select Traded set, a set that I didn't even know of before I got the cards. So, cards like that are always going to be fun. He also included a large group of Royals cards from the late '80s and early '90s. The Saberhagen card in the picture is from that lot. That card's back is pretty cool and it has the headline "SABERHAGEN HOLDS PALE HOSE HITLESS". Very cool card.

Plus, most of the cards are of former players that have been to Fanfest at least once. So I shouldn't have a shortage of cards for next years event.