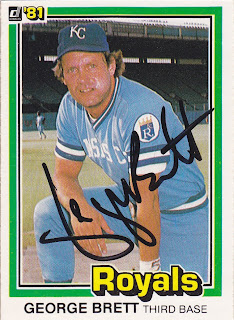 Here is my highlight from Royals Fanfest. I finally have a George Brett autograph and it is on an '81 Donruss card.

As for George Brett, he seems like the most unpleasant person in the world. You could just tell that he was hating life during the autograph session. He wouldn't talk to anyone in line or even look at them. It was very obvious that he did not want to be there.

The funny thing was that I ran into a guy I've met while getting autographs at Royals games and I asked him if he got George's autograph. He pulls out a ball that is signed and has a Hall of Fame inscription. I was surprised that he actually added the inscription and the guy said that he was pretty good with that and that there was a couple of people in front of him that even got him to sign his middle name. I asked him if George talked or looked at him and he said "no, but at least I got his autograph".

But, if you give George a microphone, he will talk and talk and talk. He's always good for interviews. I don't know if he is just sick of signing stuff for thirty-five years or what the deal is. Maybe he is just a private person. Well, he can't be too private. You'll know what I mean after seeing the following clip (NSFW).

That is the George Brett that I will remember. Maybe the next chance I have to get his autograph, I'll have him inscribe it "I shit myself twice a year".

Congrats on getting his autograph at least. I have an autograph of his from years ago but don't remember what he was like then.

Zack,
Congrats on getting Brett... Is that the highlight of the 81 auto project now? Sucks it wasn't a good experience, but it generally isn't. Some guys are glad that people still want their sig after so many years, some guys are sick of signing their name after so many years. Brett falls in to the second category. It stinks that people like Brett don't realize that the 30 seconds he spends with people is going to be a memory that the other person remembers forever. Take care!

Agreed, nice on getting the Brett sig, but too bad he wasn't a bit more pleasant.

Too bad Brett wasn't nicer. I imagine that it's not very fun to keep being asked to sign autographs once the novelty wears off, but I'd think he could make a bit of an effort at planned events (or else not agree to make the appearance in the first place.)

To be honest, I wasn't expecting much more from him. I've never seen him sign autos at games (post retirement) and I'm sure that he did his best to miss the last two fanfests.

I wonder what he's like at shows where he is getting paid.

I'm still trying to figure out who he is talking to in that clip. It sounds like he says "Porter" in the beginning, but that doesn't help me at all.

Z, I'm glad you got the auto for your collection. Sorry it wasn't more pleasant. If he didn't want to be there he could have stayed home.

Awesome addition to your collection - Congrats!!!