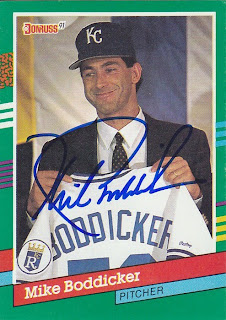 Remember these cards? Donruss wanted to be the first brand that have the player with his new team colors, so they took a picture at the press conference. Other players that they did this to in the set include Darryl Strawberry and Danny Jackson, I believe. You don't see this any more, so it is obviously not a trend that caught on.

This is the fourth and final Mike Boddicker card from Fanfest. After Mike's 17-win season in Boston, he became a free agent. The Royals threw just over three million a year at him and he signed with them on the 21st of November, 1990. In his first season in KC, he went 12-12 with a 4.08 ERA. In his second season, he pitched mostly out of the bullpen and his ERA rose to 4.98. In April if 1993, the Royals decided to cut their losses and they sold him to the Brewers. He had a 5.67 ERA in ten starts for them before hanging them up.

This was the second time in three Fanfests that Mike appeared. It's kind of cool that he comes back for them considering he spent so little time in Kansas City. About the only other players to appear from that era is Brian McRae and Mike Macfarlane.
at 3:55 PM

I think I'm the only one who actually liked the press conference cards.

I think it comes from being a Mets fan in the early 1990s... we had a lot of big name acquisitions who turned out to be busts, so that photo op at the podium turned out to be the high point of their Mets careers.

In any event, it's a cool card to get signed.