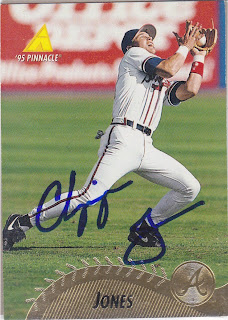 This is another awesome TTM that I got back in the mid-'90s, most likely 1995. Looking back, it is great to see a few successful TTMs from young players that turned out to be really good. More often than not, you end up with the Ted Woods and Phil Hiatts.

I don't think that I need to say much about Chipper. His career speaks for itself. His batting average did fall 100 points from last year, though. For most players, that would be catastrophic. But not for Chipper. He still finished at .264, which was the second lowest of his career. It makes me wonder if it was an off year or is his age catching up with him?

So, what do you think? If Chipper retired today, would he be Hall of Fame worthy?

The back of this card lists Chipper's position as "Infield/OF". He can do it all.
at 7:01 PM

Good ole Larry is my least favorite player this side of Derek Jeter, but it's still a nice autograph to have.

Yes, I think he's a Hall of Famer, but it would help his case if he can build his career totals a little more.

I would think he'd walk into the Hall easily.

Yeah, easy HOF in my book. By offense alone he's a top 50 all time player, even in many counting statistics.

Top 100 all time in:
Times on base
RBI
Runs
Total Bases
Doubles

Some numbers that are easy on the eyes:

Great autograph! Yeah, Chip is totally a Hall of Famer.

I think Chipper Jones is one of the most underrated players in baseball over the past 20 years. He has been very consistent and won MVP's, batting titles, and gold gloves.