Yesterday, on the way home from Minneapolis, I decided to cut through Nebraska rather than drive through Kansas City. The Sprint Cup race was in KC, and I wanted to avoid that traffic at all costs. Shortly after getting on I-80 in Des Moines, I was low on gas and looking for a gas station. I saw a sign for the Bob Feller Museum in Van Meter, Iowa and there happened to be a gas station in the town as well. So, I stopped for gas and then headed to the museum.
(click on pictures for an enlarged view) 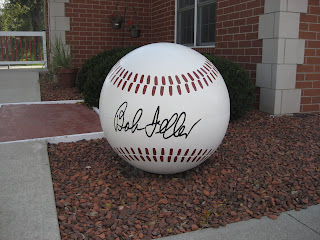 The museum was very small and the one thing that stood out to me the most was the outside wall by the small parking lot. 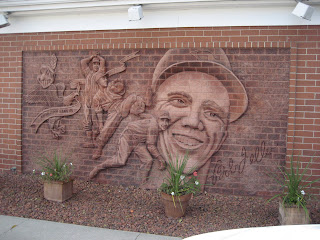 It may not look like much, but the wall has a 3D look to it. From the side shot here, you can see that everything sticks out from the wall. Technically, I think that this is called a relief. 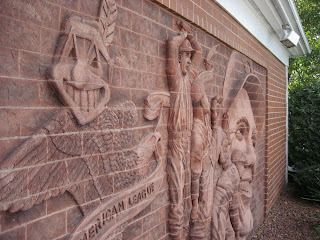 I got to the museum just before it closed and watched most of a video about Bob. It was kind of funny since it was probably made in the early '80s and was hosted by Tom Seaver.

There were only two rooms in the museum. One had tons of memorabilia from his youth, his Navy years, and his playing days. It was obviously the better of the two rooms. They even had the bat that Babe Ruth held during his retirement ceremony at Yankee Stadium in 1948. 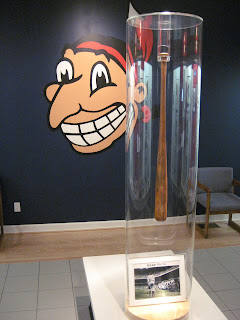 That artifact had the best story in the museum. The Indians were in town that day. For some reason, before the Babe went onto the field, he grabbed a bat. The bat that he grabbed just happened to be Bob Feller's (why he was in the Indians dugout, I do not know). After the ceremony, one of the Indians players got the bat and got the Babe to sign it (the signature is just barely visible now). I think that Bob ended up giving the bat to the player that had got it signed (I don't quite remember that part) and Bob signed it as well. Many years later, the bat ended up in an auction and Upper Deck bought it for $107,000. They ended up giving it away in a sweepstakes and a teacher in Seattle won it. The teacher was pretty happy with it until he learned that he would have to pay over $30,000 in taxes to keep it. He tried to raise money for it, but he ended up reaching an agreement with Bob for an undisclosed amount. Now the bat is on display at the museum.

The other room had some oddball stuff in it. One of the things was the Bob Feller Award which is given to the best high school pitchers in Iowa every year. They also had some memorabilia from all of the Hall of Famers at Yankee Stadium last year for the All-Star game.

They had a small, but nice, gift shop. They had the usual t-shirts and things like that. They also had a ton of autographed memorabilia from former players that had been there for signings. They had autographed balls, bats, jerseys, and 8x10s. They also had many things there signed by Bob.

I talked to the guy that ran the place and he told me that the autograph signings were what kept the doors open. He also said that he was amazed at how many autograph requests Bob still gets through the museum every week. I asked if there was a charge for the autographs and he said that it was $25 and another $5 for an inscription. I looked down in the case that I was leaning on and noticed some autographed cards and I asked how much those were. He said that they were $10.

Most of the "cards" were just pictures cut so that they were card size. There were even a few '08 Goudey cards of him. But unfortunately, those were not signed. I finally noticed an oddball card that was more than just a picture (there was an actual back to it) and decided to get it. It is numbered 10/100, but I do not recognise the logo at all. There is no date or any other useful information on the back besides the card number- 4. Does anyone know anything about this card? All I know about it is that it saved me $15 by not having to send my own card for him to sign. 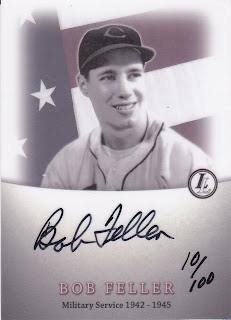 The card briefly talks about Bob enlisting into the Navy two days after Pearl Harbor. In 2006, I was driving to Georgia from my grandparent's home in Texas. When I got to Mobile, Alabama, I decided to take a break and check out the USS Alabama that was on display there. The Alabama was an old battleship and one of the main things that I remember about it was that Bob served on the ship. They had a few pictures and autographs on display there. (Another thing that I remember about it was that the movie "Under Siege" was filmed there). It wasn't mentioned in the museum, but I thought that I read in the Alabama that Bob was the first Major Leaguer to join the service after Pearl Harbor. That is something worth appreciating and here is a picture I took of the ship on that trip (it's Bob Feller related). 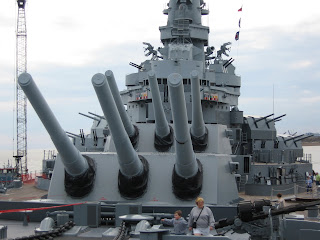 As for what could have been and still might be the final days of the Metrodome, I had a really good time. I went to the game on Friday and Saturday. I waited too long to get tickets to the Sunday game and I am kind of glad that I didn't go to it since it wasn't the last game at the dome. But here is a picture from Fridays game. Notice the retired numbers in the upper deck in the outfield. 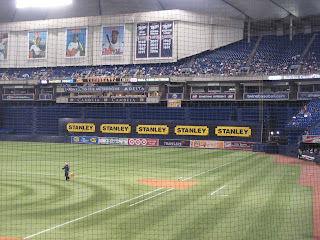 Here is a picture from the game on Saturday. They opened up the seating in the upper deck and pulled up the curtains that the banners and retired numbers were on. 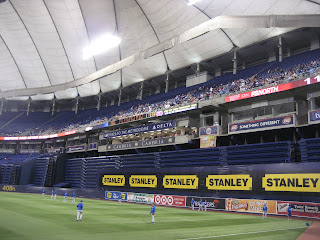 I also had time on Saturday morning to check out Target Field, the Twins new home next year. I had a hard time getting around the outside of the park, but that could have been because some of the areas were closed off because of the construction. Hopefully, it will be easier to get around it next spring. But, I liked the look of the ballpark. There was no red brick to be seen. That is always a plus in my book. Also, check out the roof. There are no light towers sticking up from it. 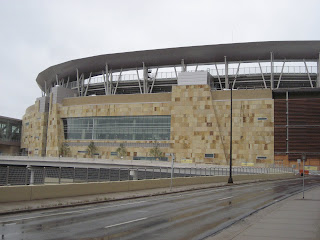 The reason there are no light towers is not because they have not added them yet. Instead, they tucked all of the lights into two continuous rows underneath the upper deck's cover (I took this picture from the top level of a nearby parking garage). 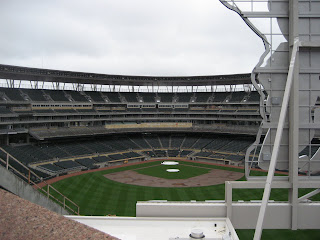 All in all, I had a great time this weekend. It was also sad since my baseball season is now officially over. There will be no in-person autographs until Royals Fanfest in January. But don't worry, I have enough autographs to get the blog through the off-season. Plus, I will be trying to add some '81 Donruss and vintage TTMs along the way.

Tomorrow, I will have a couple of '91 Topps to post. Hopefully, I will be starting my 1995 cards next week. I'm looking forward to it since the very first one is of a Hall of Famer.
at 10:25 PM

I don't know anything about the card other than it looks really sharp. As a former Navy man myself, I can appreciate his service. Nice post Zman!

Thank you Brian and I appreciate your service.

Very cool. If I'm ever in Iowa, I'll definitely check out Bob's museum.

Did you go to see the Royals or for the closing of the dome. Both I imagine - Nice bonus getting the Feller Museum in.

There is the Babe Ruth Museum in Baltimore, which I hear is small and sounds similar.

Did you happen to get a pix of the retired numbers including Jackie Robinson's. I would like to know if he had a banner.

I had only been to the Dome once, so I thought that it would be fun to go to one more game there. Plus, the Royals were playing and I try to make it to a couple of road games a year and hadn't had a chance to that until now. So, yeah, it was both.

I went to the Ruth museum last month and it was a little bigger than the Feller one, but for some reason, I wasn't that impressed with the Ruth museum. A couple of the rooms were made to look how the house would have looked while Ruth lived there and that just wasn't interesting to me.

Robinson does have a banner at the dome. I'll email you a picture.