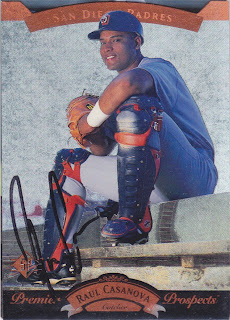 This is another Padrograph from Rod. This one features journeyman backup cacher, Raul Casanova. Interestingly, Raul never played a game with the Padres. He was traded to Detroit before that could happen.

Raul played parts of nine seasons in the big leagues. He only appeared in more than 100 games in a season once. He spent time with the Tigers, Brewers, Orioles, White Sox, Devil Rays, and Mets. He also spent some time in the Padres, Rockies, Red Sox, Royals, and A's organizations. This season was spent playing for two different Mexican League teams.

Speaking of Padrographs, there is only a couple of days left to enter his contest. If you haven't already done so, check it out.
at 2:44 PM

I remember seeing him when he was with the Brewers. I'm not sure if I was able to get him to sign the cards I had or not. No big loss if I didn't.