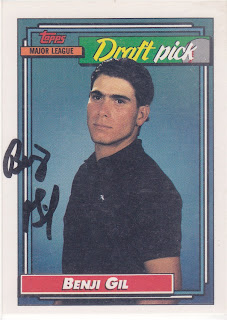 I got this card signed through the mail in either 1993 or 1995. Luckily Benji had more common sense than I did and he signed on the edge of the card rather than on his shirt. Otherwise, it would have looked very similar to the Paul Molitor signature that I have.

Benji only played in the Majors for eight years, split between the Texas Rangers and Anaheim Angles. He was basically a light hitting infielder that wasn't very adept with the glove, either. That's not a good combination. After hitting .192 for the Angels in 2003, he was released. He played in the minors for a couple more years before hanging it up. He was, however, an .800 career hitter in the World Series (4-5).

This is not the best looking draft pick card that Topps ever made. Most of the draft pick cards in the set showed the player with their amateur team. I have no idea why this card is different.
at 4:40 PM

Man, Benji used to spare me to death. I wasn't sad to see him go, but at least you made good use of a weird card. That is one of the things I like about what you're doing. You take a card that may not have any value to anyone else and make it something worth having. Thanks for sharing the stories behind the autos.