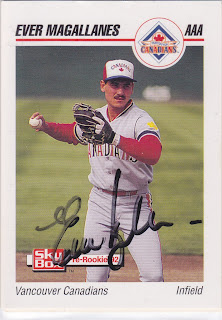 I got this card signed last summer at a Rancho Cucamonga Quakes game. Ever was the Quakes manager. I wasn't able to spot him before the game, but I happened to run into his roommate and he pointed him out to me. He no longer had the mustache and had a shaved head, too. I waited around a little bit after the game and got this card signed while he was headed to the clubhouse. He would have signed more than this card if I would have had any since he started to sign the card of his hitting coach before I got him to stop. He chuckled about it, said something in Spanish to his hitting coach and then took off. I waited about ten more minutes to get Francisco Matos (the hitting coach) to sign. He was busy filling out charts, so I left with a defaced minor league card. Several months later, I found another card of Ever that I had in the 1991 Bowman set.

Today, the Vancouver Canadians are a class A short season team. This is the last minor league card that I will have on here for at least a month or two. At least the posed shot on here is better than yesterday's card.
at 8:27 PM

Ya, the alternating colors are sweet. It has a Molsen beer feel.