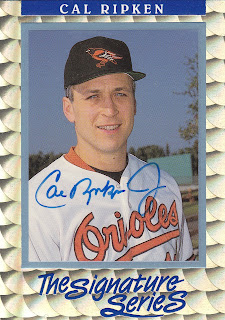 If I would have participated in the blog bat around, this would have been listed as the centerpiece of my collection. I got this card in a pack in 1992 and to this day, it is still my best pull. This was the second year that Donruss inserted signature cards in their packs. There is a lot of gold foiling on the card front, but I think that it looks pretty good for 1992 standards. Actually, I like the gold foil. It gives off a prism effect that adds a lot of color to the front.

It is kind of funny how I ended up getting this card. Back in 1992, my dad was headed to the supermarket and I told him to grab some cards for me. I told him to get one pack of baseball cards, one pack of football cards, one pack basketball cards, and one pack of hockey cards. To my dismay, my dad came home with two packs of '92 Donruss and I was pissed. I refused to open them up because they weren't what I wanted. So, my dad opened them up. When he got to this card, he said "what's this, a Diamond King?". That was the first year that the DKs were inserts, so they were cool cards to pull. So, I got up to check it out and I think that my heart skipped a beat when I saw this card.

In '92, this card booked for about $400. Last time I checked, it was at $250. That kind of surprised me since most of the certified autos today aren't worth a whole lot, especially if there 5000 of them printed. I just looked for one of these on ebay to see what they were going for, but I didn't see any.

The photo here reminds me of some '70s Topps pictures (it's tilted). Also, I finally got myself a scanner, so all of the scans are going to be much better looking. I am going to re-scan all of the cards that I have shown on here so they will look better. I have already got all of the pre-1980 cards redone.

Last year, Cal came to my hometown to speak at the annual Chamber of Commerce dinner. He took photos with everyone after the event and then when that was over, he signed for less than five minutes. I didn't get my ball signed. But when he was leaving, I noticed which exit he was going to use and intercepted him outside. He was nice enough to sign my 1998 All-Star game ball. However, he was in a hurry and he signed it with a Sharpie. We'll see how that turns out. 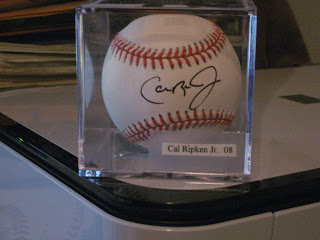 Great looking card and good story. Cal seems to handle himself with so much class. A lesser ball player would have said, 'get lost kid.'

I was also fortunate to find that same signature series card and I couldn't agree more that it's the center piece of my collection. I used to buy baseball cards by the box and just so happened to unwrap 0226 of 5000. It's sat in my room untouched in the hard plastic protector I placed it in over 15 years ago.