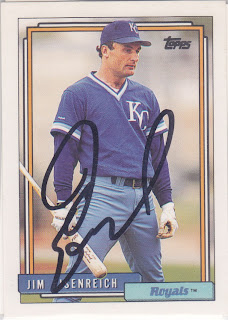 I got this card signed at Royals Fanfest last month. I had three cards and Jim signed all three of them for me.

Jim started his career in 1982 with the Twins. He was hitting pretty good, but was having problems with hyperventilating and a nervous twitch. After 34 games in the Majors, he was placed on the DL with a nervous disorder. He came back in '83 as the Twins Opening Day centerfielder. But, he quit after two games. He was back in 1984, but he soon headed to the DL again. After just twelve games played that year, he retired.

Three years later, he was diagnosed with Tourette's Syndrome. With proper medication, his condition improved and he decided to give baseball another try. He was picked up on waivers by the Royals and, after a brief stint in Memphis, was back in the Major Leagues. He struggled his first two seasons in Kansas City. But in his third season, he lead the team in hitting (.293), doubles (33), triples (7), and steals (27). He won Royals Player of the Year for his effort. He played three more season in Kansas City before the Royals let him become a free agent. He spent seven more seasons in the Majors playing for the Phillies, Marlins, and Dodgers. He played in the 1993 and 1997 World Series.

His signature on this card looks a lot different than the one on Baseball Almanac. He seems to be shortening his signature as time goes by. I have an 8x10 that he signed in 2003 and it is kind of in between the two card signatures. Somewhere, I have an autograph on a program that I got in 1998. I need to find that and see what his signature looks like there.
at 9:22 PM