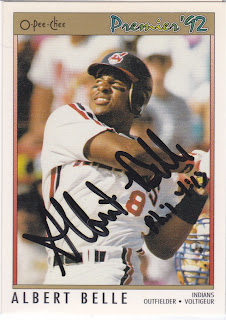 Through the mail. Early '90s. As for this card, I beleive that this was the second year that OPC made a set that was independent of the Topps set. If I remember right, both the '91 and '92 set looked exactly the same except this set had the '92 on it. There was no year on the '91's front. Also, the players name and position were slightly different in '91. On the '91s, there was two lines of text. The name was on top and the team and position was on bottom. The only place that I remember seeing these was at card shows at the mall.

Looking back on it now, I am surprised that I got this card signed through the mail. Albert didn't have the best reputation. To me, he doesn't seem like the kind of guy that would be an avid signer. Maybe I underestimate the guy (heck, supposedly Milton Bradley signs TTM). Or maybe I just got lucky and got to him early enough in his career. I don't know. Did anyone else out there have any success with him?
at 4:57 PM

No, but I don't really remember if I ever tried. I wonder if there are any "Joey Belle" autographs out there.

I have such a card signed by "Joey Belle" so I can attest to the fact that there is at least one such card.

I have a Joey Belle autograph on a baseball. I had it signed in person after an Indians game when I was a little kid - it will always be my favorite piece of memorabilia.