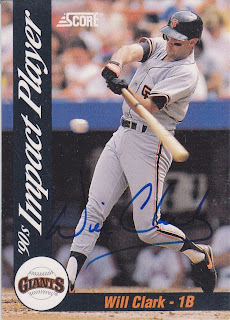 Here is another through the mail success of mine from the early '90s. I was pretty happy when I got this one back. Will was one of the big guns from the great 1986 rookie class. While he didn't have a great rookie season, he made up for it his sophomore year. He went to five straight All-Star games with the Giants and added another one while he was in Texas.

He never had the same success after he left the Giants. He had a great season in 1998 and was always around the .300 mark. In his last season, he was traded from the O's to the Cardinals and went on a tear. In the 51 games he played as a Cardinal, he hit .345 with 12 homers and 42 RBI. In a three-game sweep of the Braves in the Divisional Series, he hit a homer and knocked in 4 runs. In the NLCS, he was 7-17 with a solo home run. He retired after that series.

This card was a insert card that you could get in certian '92 Score packs. I can't remember which ones, though. I find it funny that they were making ""90s Impact Player" cards in 1992. Seems to me that they should have waited to make those in 1999 or 2000. Imagine how different the checklist would have been then.

It's kind of hard to see because of the dugout, but that is a sweet-looking signature. I love how he underlines his last name like a baseball jersey (like the Royals, Dodgers, and Marlins for example). That is pretty cool. I remember seeing that Will got a job this year with the Giants. It will be interesting to see if he still signs through the mail.
at 3:04 PM

That is a nice-looking signature.

From what I can tell, he didn't sign much last year when he had some sort of role with the Diamondbacks. He did sign the previous two years. I may take a shot, since I've got plenty of old cards & I never got his autograph during his playing days.

I dig the swoop. Very cool on a baseball card.

I wonder if he signs his checks like that too. I can imagine a young cashier somewhere who didn't know about "Will the Thrill." The whole thing might come across as pretty cocky!

Will is my favorite all-time player. I was so happy when he came to Texas the same year I got out of the Navy. I went to about 25 games in 1994 because he was here. He played here 5 years and what really messed him up was hitting his elbow on the rail chasing a foul ball. He never had the same power after that. Great card!

Have you tried Will recently? I would love to get an address for a TTM for him.