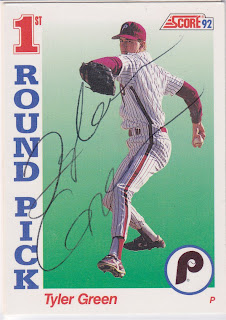 I got this card signed through the mail in either 1993 or 1995 (most likely '95). Green was a first round pick out of a local school, Wichita State. I'm a big WSU fan and try to go to at least one game a year and more if they host a regional. So, I was pretty excited when I got this card back. I wish that I would have had doubles of his '92 Topps card, which pictured him in the Shockers uniform. But, I didn't, so I sent him this one.

Tyler had an unsuccessful Major League career. He got called up to the big leagues within a year of being drafted. He pitched in three games (two starts) and gave up 6 earned runs in 7.1 innings. He was sent back down and spent the rest of the season and all of 1994 in AAA. He made the Phillies team out of Spring Training in 1995. He finished that year 8-9 with a 5.31 ERA. He only made 25 starts that year and missed all of '96, so he must have hurt his arm. He did, however, make the National League All-Star team that year. On July 1st, Tyler was 8-4 with a 2.75 ERA. He pitched one inning in the All-Star game and gave up hits to the first two batters he faced (Ripken and Boggs). He then struck out Kirby Pucket and got the next two batters to ground out. It was all downhill from there. On August 18th, he gave up 3 home runs and 4 runs in a 1.1 inning start. On September 8th, he had his last (and worst) start of the year. He gave up 5 earned runs in only a third of an inning. After that, he made one relief appearance and was shut down.