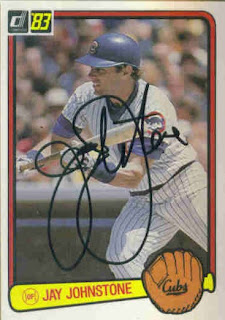 #561 Jay Johnstone
I got this card signed at the Willie Wilson Classic. The main point of the WWC was to raise money for charity. They had a big autograph session before the game where they charged $10 per autograph (I'll get into this more in a later post). I couldn't make it early enough for the autograph session, but I was there early enough for batting practice. The first person that I saw close to the stands was Dennis Leonard. I asked him to sign, and he said that they weren't allowed to because they were trying to raise money. Before the game started, they pointed out that the players would not sign any autographs, but you could buy a $50 ticket to the post-game party and get autographs there. To get to the point, Jay was in charge of a silent auction where he had all kinds of memorabilia up for auction. Towards the end of the game, he was up on the concourse collecting money from the auction winners. So I went up there and asked for his autograph and he was more than happy to sign.
at 7:03 PM