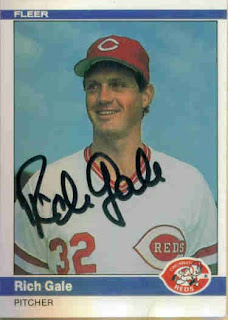 I got this card (and the previous McClure card) about a month and a half ago. I bought about eight cello packs of '84 Fleer for about $20. Before I bought those packs, I probably had five cards from the set that I picked up in trades as a kid. So, it was nice to get those and I was kind of happy when I got these two cards signed.

This signature was also obtained at the Round Rock game. I've never heard of Rich Gale until I started looking for some of his cards to get signed. Lucky for me, he was wearing his jersey (instead of some lightweight jacket most players seem to wear for warm-ups/batting practice) prior to the game and I could see his number. Otherwise, I wouldn't have known who he was. He really didn't look like the guy on my cards.